Old Forester Birthday Bourbon has been flying under the radar for sometime. However, for the 2013 release, there have been some reviews in the blogosphere that have swooned over it – specifically applauding its nose. That had me worried as OFBB was pasted all over Bourbon Exchange. Flipping OFBB? Say it isn’t so! Thankfully the craze for this was muted. There are still plenty in stores in PA if you are looking to buy. 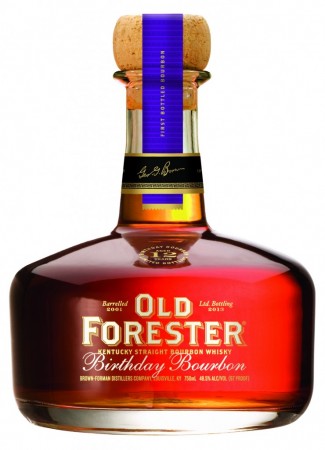 Very rich nose that is hard to decipher. Time rewards you with this one. While the taste is full, it can get overshadowed by tannin. Thankfully, the finish sweeps in and hangs forever, taking its time to slowly yield those delicious creamy, nutty citrus notes. If I drank this blind, I’d hazard it would be an aged rum with the tropical fruits and fiery baking spices. Unique as always, Old Forester Birthday Bourbon is always a welcome release, with this one packing tons of flavor. At the very least, it is definitely better than past releases, but for my tastes, I think this one falls short for its heavy tannin. Which is why it underscored my favorite last year, the 2012 Birthday release.

From Their Press Release