There’s obviously a lot of hype over drew estate cigars, especially undercrowns and Ligas and such, so, when I managed to pick up an undercrown from a B&M, I was pretty excited.

First off, the construction was absolutely magnificent, very tightly wrapped with no stems in the wrapper, it’s a beautiful stick. Not to mention the band is gorgeous. I had forgotten my cutter at home so I had to use the shitty guillotine cutter the shop handed me, needless to say, I got a shitty guillotine cut. I don’t blame the cigar for that.

It smoked very well, very tight ash and a tight draw, it had an even burn and I did two very minor touch-ups that probably would have fixed themselves eventually. The smoke output was less than I prefer however. 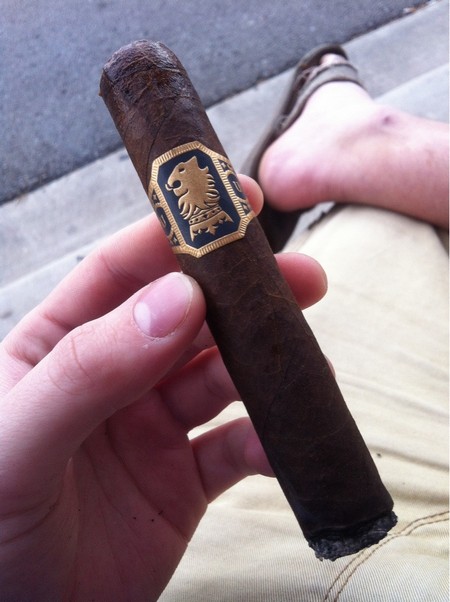 I’m very bad with flavors so I won’t pretend like I know what I’m talking about here but it was fairly full bodied and seemed to me had an earthy taste with tobacco flavorings, about halfway through it seemed to get a little spicier. The flavor seemed consistent to my underdeveloped pallet. I paired the stick with a chai latte (the store I bought it from is actually a coffee shop with a large cabinet humidor) and they paired fantastically, chai is one of my favorite pairing drinks. The stick was $8.00.

Overall, I enjoyed the stick. I think the hype comes more from DE’s marketing team then actual worth but regardless, I was pleased. I think a comparable stick could be found for less money, but I also think the undercrown has some value in it’s aesthetics if that matters to you. I’d give the stick a 6.5/10 and I definitely wouldn’t mind smoking one again some time.

I know that there are numerous reviews of undercrowns but I had never had one and wanted to put my two cents in. Thanks for reading!

[…] and there’s nothing like a great book to accompany a glass of Aberlour 12 and a phenomenal Liga, and that certainly includes comic […]