We’ve talked about the Ardbeg Galileo (12 y/o) and the Uigeadail (? y/o), but this younger version is pretty wild. We’ve seen this get some mixed reviews in the past, but I’m definitely a fan. All that said, let’s get into it. 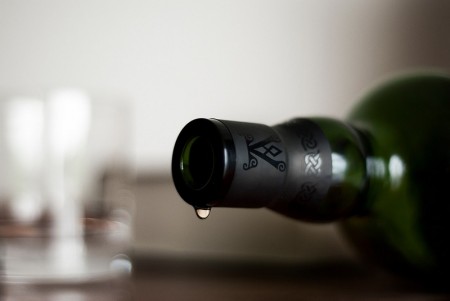 PEAT. Like a punch in the nose, peat makes its earthy presence known. Right behind that is a strong smell of brine and smoke, like standing on the seashore next to a big bonfire. Saltwater taffy lends a small sweetness, then a light iodine and band-aid smell. Underneath all of that is a very pleasant smell of petrichor. This nose is tremendous; you smell it the second you open the bottle and everyone around you knows that you’re drinking something strong.

Very light straw color, and legs that linger for a long time on the side of the glass. There’s obviously no added caramel color in this whisky. An uninitiated Scotch drinker might be shocked that such a lightly colored drink could have a smell that fills the entire room.

Caramel shows up first, then a saltwater taffy followed by some vegetal notes like freshly cut wheat grass. Peat shows up to the party fashionably late, and then the smoke, like a low-burning campfire. There’s a distinct oakiness, and then a very pleasant combination of dark chocolate, sweet peppers, and honey bring up the rear. After drinking this for awhile and letting it breathe, the chocolate, caramel, and smoke take over. It’s kind of like an Islay candy bar.

Watery, and on the thinner side. There’s a very potent astringency at first, but I got used to it rather quickly. It makes its presence known, but this isn’t a mouth-coating oily scotch.

Initially, there was nothing at all. It was really weird on the first sip, the taste completely disappeared. After a couple seconds, it came back with a very creamy caramel followed by smoke and taffy, then a taste of salty ocean air. Lots of cocoa, like a really dark baker’s chocolate. Oak and hay bring up the rear. This finish is loooooooooooooooong, I was tasting it for at least ten or fifteen minutes after my last sip. It leaves a lingering numbness that is altogether rather pleasant.

I really, really, really, really like this Scotch. Islays have been a favorite of mine for awhile, but this one is incredible. My first experience with it was when I had a massive head cold (I didn’t write this review then, don’t worry), and even then it was delicious. In my opinion, you’ll be very hard pressed to find a better Islay for this price.

As a side note, I had a dram of this yesterday with some fish and chips. It was an excellent pairing; I daresay it’s even better than Islay and blue cheese.