Don’t be fooled by the lack of an age statement, or the fact that it’s not the most expensive entry in the Wiser’s portfolio, Wiser’s Legacy may be the absolute best whisky that the company makes—and possibly the best Canadian whisky there is out there.

It’s made from the recipe that company-founder J.P. Wiser was working on just before his death—a rye-heavy whisky (actual rye, unlike some Canadian whiskies: the only non-rye content in Legacy is a small amount of barley to assist in the fermentation/distillation process) made using traditional copper pot stills and aged in fresh, toasted oak.

The end result is something, honestly, unbelievable. And at a price that’s similarly hard to believe. I’m not sure whether Wiser’s exports this particular whisky, but if they don’t, it’s an absolute crime (although, you know, more for me). It seems apropos to quote Jim Murray on this stuff: “I was seduced like a 16-year-old virgin schoolboy in the hands of a 30-year-old vixen.” 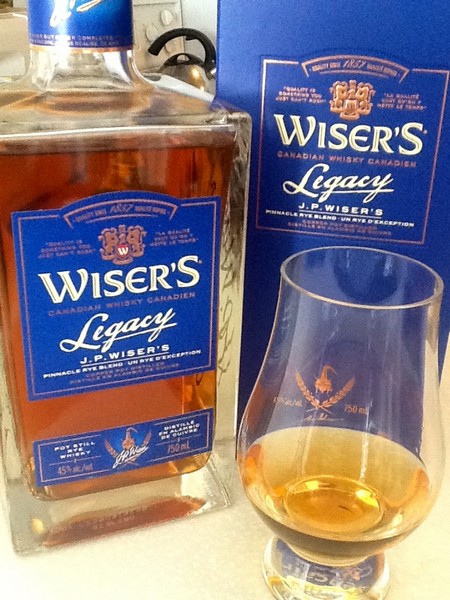 750mL bottle; $53 Cdn. in the province of Alberta (pricy for a Canadian whisky, but certainly in the range of most entry-level single malts)

Deep copper/burnished. Lovely looking whisky, and a lovely square bottle (with box!) to go with it. This stuff screams prestige. . . .

. . . Which is only fair, because Wiser’s Legacy has the most brilliant nose I’ve ever encountered in a Canadian whisky, though it’s one you admittedly have to work at—at first, anyway. Over time, it really begins to explode out of the glass, and it’s mouth-watering. It’s hard to resist the urge toward just over-the-top praise. Not a hint of alcohol prickle. Beautiful, brilliant, vibrant, creamy vanilla. Butterscotch, brilliant caramel. Faint maple. Big, big oak notes, which you might expect—toasted oak, fresh-cut oak. Green and red apples. And the rye! Good god, the rye. Spicy rye; dusty rye; dark and light rye bread. Sourdough. Cloves. Cinnamon. Baking spaces. Pickles? There’s just a brilliant kind of interplay between the smooth delicacy you’d expect from a Canadian whisky and the boldness and complexity of the rye.

Velvety and creamy mouthfeel, and extraordinarily restrained alcohol for the high (by Cdn. whisky standards) ABV. Smooth—which I know some people around these parts view as a handicap, but it works in the context because there’s still so much flavour here: a bit of rye spiciness, white pepper, Granny smith apples, toasted oak really asserting itself, fresh rye bread. Cinnamon, cloves, baking spices. Faint citrus kick. Vanilla, caramel. Just lovely.

Medium-to-long, and a total oak-bomb on the finish. The heat goes before the flavour does, which is a long, lingering kick of vanilla, fresh wood and green apples.

Final Thoughts: Wow. Yup. Wiser’s Legacy might be the Canadian whisky, proof that a much-maligned style can compete on the world stage. I don’t know what else to say. It takes all the things people see as liabilities about Canadian whisky and just turns them right on their head. A whisky that’s somehow simultaneously delicate and bold, smooth and assertive. It does everything right. I actually feel the need to reassure everyone that I’m not being paid by anyone.