I added a few drops of Water and the Fruit on the Palate becomes slightly clearer. The rest though is simply washed down. 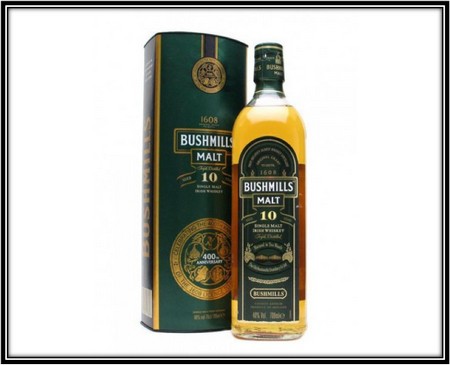 The Old Bushmills Distillery is located in the Antrim County in Northern Ireland. Since 2005 it’s owned by the Diageo Group. In 1608 a licence to distill was granted by King James I which makes Bushmills the oldest licensed Distillery. That’s why the year 1608 is printed on the label. The Distillery produces a whole range of Bushmills expressions including the Original or White Label as it’s often referred to, the Black Bush, the 10, 12, 16 and 21 Years Single Malts and the Special Edition 1608, released in 2008 to commemorate the 400th Anniversary of Legal Distilling at Bushmills. The Bushmills 10 Years is the only 10 Year Old Single Malt from Ireland. It is Triple-Distilled, unpeated and matured in Bourbon infused American Oak Barrels and Sherry Casks. It’s not too expensive at around 45 US Dollars.

Conclusion: This was Whisky of the year in 2007 I believe! And Jim Murray rewards this with 90 points in his Whisky Bible! And I? I can’t say I like this Bushmills expression a lot. It’s not really bad but it’s too light, too watery and too understated. Some people would call this dram Smooth, Crisp, Clean and Light. In my book this is called watery, uninteresting and utterly forgettable.

And that’s all there is to the Bushmills 10 Year old Single Malt if you ask me!