Originally posted on Reddit by bravado. Give him an upvote, he deserves it!

Still Waters is a brand new Canadian distillery in Concord, ON (Suburb of Toronto). They’re almost the exact opposite of a traditional, bland big Canadian distiller. Their twitter feed is very active, they seem to have distilled every possible whisky type under the sun and they’ve even set up a site[2] to log each of their casks as they fill them!

I was at the tiny distillery today on a quick road trip and decided to pick up their new ‘single malt’ new make spirit from 100% barley. 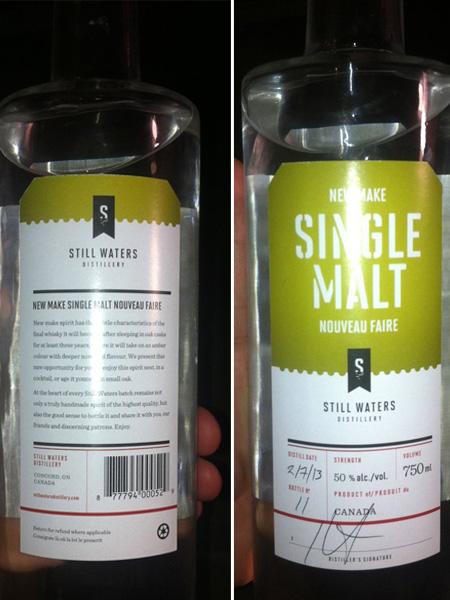 Still Waters is so new that their only publicly available product is a fantastic blend of other Canadian whiskies that they put together some time ago. It’s been available at the LCBO (Ontario) and bigger liquor stores in Canada for some time. It’s pretty affordable and definitely unique – if possible, please consider picking one up to try. I’ll definitely make an effort to review it in the future. The distillery also had a new make rye spirit (80-90% rye, they explained) but I’m sticking to a strict budget so I had to make a difficult decision with purchasing!

Their website explains that they’ve currently laid down casks of single malt barley, straight rye and even corn whisky for future bottlings. I look forward to seeing them once they’ve been aged 3 years.

To pass the time and get some revenue, they seem to have made an impact in the ‘premium’ vodka market with their own vodka production. Unfortunately I don’t have any taste whatsoever for the clear stuff so I can’t make any claims about its quality. (It’s very exciting to taste something that was just distilled last week!) 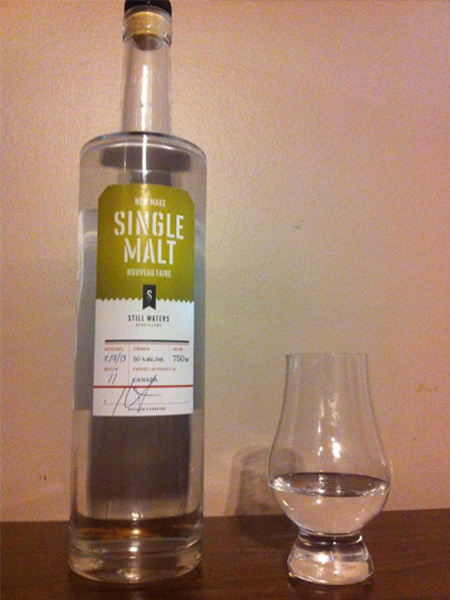 With this being my first opportunity to try a new make spirit, I still have very little idea how to characterise what I’m experiencing! I’ve read blog posts and watched ralfy videos but the flavour remains very difficult to nail down and define. All the books and articles always mentioned how much oak contributes to the end product but it’s even more believable here in person.

Still Waters is a fascinating operation and I’d love to learn more about them and head back to the distillery some day and grab any of their new make rye – if they can keep it available!

Their entire approach is very craft and quite adventurous. I’m very pleased with their plans for the future and they should prove to inject some badly-needed variety into a relatively stale whisky category. I’m very hopeful that the ‘new group’ of risk-taking distillers is going to make a big impact in Canada: Forty Creek, Still Waters, Okanagan Spirits, and the Glenora Distillery.

I can’t give a final score since I’d really like to know how the oak interacts with this malted barley. It’s already got a cereal and fruit flavour, so I’m very interested in the future. Still Waters seem to be doing everything right and I wish them as much luck as possible in the future. It seems the Americans and the British have their own boom of very high quality new distilleries so it’s only fair that Canada hops on board as well.

I urge everybody to do a bit of research and check out nearby distillers or brewers. It’s a fascinating world out there.